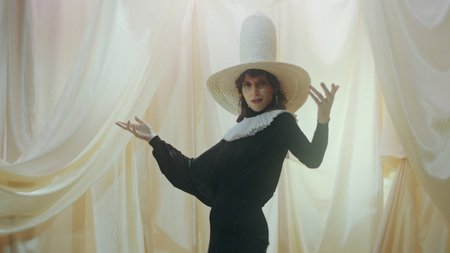 NZ @ FAI 2019
A strong contingent of delegates from New Zealand attended the Folk Alliance International Conference last month. This year it was held in snowy Montreal, Canada, with Graeme James, Māmā Mihirangi & The Māreikura and Chris Dent and Pascal Roggen (of Albi & The Wolves) all having great showcase performances.  It was a very productive conference for the NZ artists, and we are expecting to see many international festival appearances announced as a result in the coming months!

Aldous Harding
Aldous Harding’s highly anticipated third album, Designer, is finally on the way and if the first single, ‘The Barrel’ is anything to go by, fans worldwide are in for a treat.

NPR haven’t hidden their excitement with All Songs Considered saying the track “continues a journey of wild imagination” and publishing an interview with Aldous herself. 'The Barrel’ was also featured on The FADER, Stereogum called it “a pretty song, with acoustic guitars and strings, but it also has a creeping sense of unease working for it, and that sense gets magnified a whole lot once you watch the video." Gorilla Vs Bear called it “stunning” and Paste named it Best Song of the Day.

Designer is set for release on 28 April, via 4AD and Flying Nun, and Aldous is scheduled to headline shows in North America, Europe, and the UK from April through July.

Kaylee Bell
Up-and-coming country music star, Kaylee Bell, released her new single ‘Keith’ and it has been getting love from all around the world. In Australia, ‘Keith’ was named Song of the Day by Australia’s The Music Network and it’s getting play on KIX Country and Triple M. On the Spotify front, she was the cover artist on the Fresh Country playlist (125k followers), featured on the USA’s Wild Country playlist (748k listeners) and on New Music Nashville (13k followers) while on Apple Music the track made the Cool Country, Country Wide and the Country Hot Tracks playlists. Kaylee was also interviewed by the UK’s LYRIC Magazine.

Tiny Ruins
Olympic Girls, the third album from Tiny Ruins aka Hollie Fullbrook, has been garnering excellent reviews since its release on 1 February on her own label Ursa Minor, through Milk! Records in Australia, Ba Da Bing in USA and Marathon Artists in Europe. The album received 8 out of 10 ratings across the board from print magazines Loud & Quiet, Mojo and Uncut. Pitchfork gave the album a 7.4 out of 10 review saying Fullbrook “embraces lyrical nuance and compositional evolution in compelling fashion”. Paste were also fans, calling the album “warm, bold and anthemic”. Tiny Ruins will be undertaking a 21-date tour of Europe and the UK starting 21 March and an 8-date tour of Australia over April and May.

Alien Weaponry
Just when you thought Alien Weaponry couldn’t possibly fit anymore dates into their schedule, they go and announce more. In the last month, Alien Weaponry have been announced for Rocklahoma in the USA, Resurrection Fest in Spain, Dynamo Metalfest in the Netherlands and Metal On The Hill in Austria. All this on top of a plethora of already-announced festival dates, an upcoming Australia tour and their as support slot for Slayer’s final ever show in Germany. They were also recently interviewed for Australian Guitar Magazine.

Broods
On 1 February, Don’t Feed The Pop Monster from Broods was unleashed on the world via Universal/Neon Gold and according to Triple J the album is “bursting with charisma and confidence”. To coincide with the album’s release, the video for their single ‘Too Proud’ also dropped the same day, and they performed the song live on The Late Late Show with James Corden. Australia’s Scenestr were fans, interviewing them in February and Slacker Radio also let them takeover DJ duties. The duo is now preparing to kick off their 19-date North American tour later this month in Santa Ana, California. The trek will include 19 stops including Seattle, Portland, Toronto, and Chicago, before wrapping up 20 April in Washington, D.C.