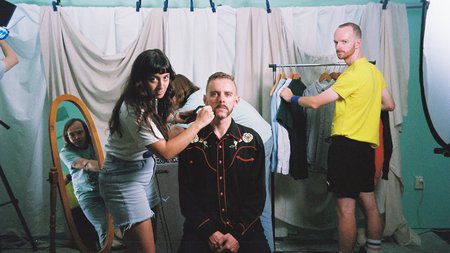 The Beths - 'Dying To Believe'

The Beths are back! Their new single ‘Dying To Believe’ dropped 9 April and it’s accompanying video is charming as ever, delighting the likes of Rolling Stone, Consequence of Sound, Stereogum, Pitchfork, NPR and Paste Magazine who even named it one of the best new songs of April.

The good news doesn’t stop there, they’ve also announced the release of their highly anticipated second album – Jump Rope Gazers will be out this July via Carpark Records. Pre-order it here!

If you missed their “Live From House” session last month, you can watch it over on YouTube now.

Ulcerate - Stare into Death and Be Well

Ulcerate released their sixth album Stare into Death and Be Still on 24 April and it’s receiving serious praise from the metal community.

“April single-handedly dropped a fat stack of Album of the Year contenders and this is one of them.” – Consequence of Sound

“This album absolutely is a must-listen, not just for fans of the subgenre but fans of heavy metal in general.” – Invisible Oranges

“Stare into Death and Be Still is a dense thicket of progressive metal that continues deliberate outward movement that excels at distinguishing these New Zealanders from not only their obvious peers, but the retroactive traditional tunnel vision metal movement.” – Metal Injection

“Flowing smoothly and cohesively as one imposing hour of fearless, inventive extreme metal, this should be another essential item on your listening list this month, whether you usually have the stomach for tech-death or not.” – The Quietus

Rolling Stone and Loudwire also raved about the title track.

If these reviews have got you curious about these technical death metal masters of Aotearoa and the world, the album is available to stream and purchase now.

While Pitchfork have hailed BENEE’s international smash hit ‘Supalonely’ as the perfect example not only of TikTok success, it’s also been named a “coronavirus anthem” by The LA Times and Singapore’s The Straits Times due to it’s theme of isolation. BENEE also recently reflected on the song and it’s success to NME and Genius.

‘Supalonely’ has now clocked over 200 million streams worldwide and earned her more than 22 million monthly listeners. It’s also currently been sitting on the Billboard Hot 100 for six weeks now (so far peaking at #58) and the UK Official Singles Chart for 8 weeks (peaking at #26 to date).

Have you seen The Tami Show yet? Tami Neilson’s been bringing a weekly show to audiences around the world from her own home via YouTube, as featured on The Sydney Morning Herald. Catch the next episode Thurs 6pm EST/Fri 10am NZT.

If that’s not enough Tami for you, you can listen to her recent interview with Andrew Ford for The Music Show on the ABC (Australia).

Tami will also be performing for Australia’s Blues On Broadbeach online concert called Bandwidth on 15 May.

You may have caught one of Nadia Reid’s live streams in the last month on Facebook or perhaps you were one of the hundreds of people who watched her more intimate ticketed stream. Shane Harrison of the Atlanta Journal-Constitution News wrote a lovely little recount about his experience attending the latter. We’re sure this isn’t the last we’ll see of Nadia Reid online before we’re all set free into the world so keep an eye on her socials for more live music and be sure to support when her live show comes to your city or town.

Nadia’s album Out Of My Province was also recently named by Brooklyn Vegan as one of their 25 Favourite Albums of 2020 so far.

Jonathan Bree - 'In The Sunshine'

In anticipation of his upcoming album, After The Curtains Close, due out 24 July via Lil' Chief Records, Jonathan Bree's released another single! 'In The Sunshine' has a pensive video filmed on the beautiful Waiheke Island and has been featured on Rolling Stone France's Editorial Playlist, and in articles on NEOLYD in Germany, Filter in Mexico and Wickedd Child in Australia.

Pre-order After The Curtains Close here!

- JessB performed for the NTS Radio (UK) Remote Utopias broadcast. The likes of Erykah Badu, Skrillex and Tame Impala were also on the line-up.
- The video for Mild Orange’s new single ‘Making Things’ featured on Variance Magazine. (Pre-order/save their self-titled album here!)
- eleven7four's single 'Where It Hurts' - which features Grammy-nominated artist Tayla Parx - has gone viral on TikTok, reaching over 19 million people in 24 hours.
- Brooklyn Vegan premiered Swallow The Rat’s video for their single ‘New Cross’.
- City Of Souls  released a video for their single 'Cruelty' and it was featured on PROG (UK). The track also made the New Metal Tracks playlist on Spotify in the US.
- Tarn PK's single 'Daylight' made the A-List Pop playlist on Apple Music in Tonga, Vanuatu and Solomon Islands.
- Indyah's single 'Lockdown' made the Apple Music New Music Daily playlist in Cambodia, Indonesia, Laos, Malaysia, Philippines, Singapore, Sri Lanka, Thailand and Vietnam.