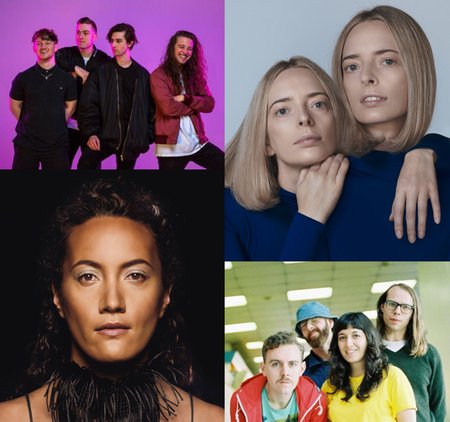 The line-up for BIGSOUND 2018 has been confirmed and we're proud to say four New Zealand acts will be performing over the four-day conference in Fortitude Valley, Brisbane, next month. Estère, Miss June and Wax Chattels were among the first artists announced, who are now being joined by The Beths to round out the superb group of up-and-coming Kiwi artists set to represent us across the ditch. We've also heard there may be some sideshows across Australia from our local acts - stay tuned for more details!

July saw Alien Weaponry set out on the first international shows of their career and the press is rolling in. Jason Whalley of legendary Australian punk band Frenzal Rhomb looked forward to their performance at Dead of Winter Festival in Brisbane; according to Hysteria Mag's review of the festival, Alien Weaponry are "definitely one to watch"; while Scenstr said their Dead of Winter set had "flashes of brilliance". Reviewing their Sydney show on 6 July, Silver Tiger Media said that with a "tight live performances [and] a very well recorded debut album, big big things are in store".

Off-stage, the band released the video for their single 'Whispers' on 17 July which was featured on Revolver Mag. Loudwire also named them as one of their 10 Up-and-Coming Bands You Need To Hear In 2018.

One of the biggest electronic music producers in the world for the last decade, Diplo has acknowledged the talent of two NZ trap producers by bringing them on board for official remixes of his recent collaborations. Auckland-based producer Montell2099, originally from Katikati, remixed Diplo's song 'Wish' which features American rapper Trippie Redd, and Auckland's QUIX remixed 'Look Back' featuring American singer, D.R.A.M.

Christchurch's Haan808 also released his single 'Bad Boy' through Diplo's label, Mad Decent, in July.
Montell2099 is set to support American producer UZ on his upcoming eight-date North American tour in September, while QUIX will be wrapping up his latest US excursion over the next month or so, concluding the tour in Atlantic City, New Jersey, on 7 September.

There will be a couple of opportunities for our neighbours across the ditch to celebrate Māori Music Month this August. Ria Hall and Rob Ruha & The Witch Doctor will be performing their Behind The Lines show on 22 August at The Lighthouse in Darwin as part of the Darwin Festival. The show is described as an explosive sonic and sensory experience showcasing collaborative works and music from their latest albums Survivance and Rules of Engagement. Tickets are available now at darwinfestival.org.au.

Then for our Brisbane whānau, Kiwi Karnival celebrates Māori Music Month at Beenleigh State High School on 25 August. This is looking to be a great night out with performances from Ria Hall, Rob Ruha and the Witch Doctor, Brown Suga, Waiatatia Youth work Shops, C Major, Soul Cutz, the Super 12 Kapa Haka Competition and more. Tickets are available now at www.ticketshack.com.au.

It seems Wellington's Drax Project are making huge moves in the northern hemisphere. Having already signed to 300 Entertainment, they performed four shows across the US,A and won hearts all over UK and Europe when they supported US pop sensation Camila Cabello on her eight-date tour - all since the beginning of this year. And they show no signs of slowing down!

Drax Project have just been announced to perform at iHeartRadio Festival in Las Vegas, NV, USA - a festival with the highest calibre of headliners including Fleetwood Mac, Mariah Carey and Justin Timberlake. The acts they'll feature alongside on the Daytime Stage are impressive, including Dua Lipa, Lil Uzi Vert and 5 Seconds of Summer.

They're also all over the online space with a live performance for Paste Magazine in New York, an interview in London-based Wonderland Magazine and making it on the daily Breaking List of Apple Music's Beats1 DJ, Zane Lowe.

Unsigned Only is an international music competition for independent and unsigned artists which announced this year's finalists for each of its 13 categories in July. Among those were three New Zealand artists! These were Miller Yule with his song 'Diamonds' for the Adult Contemporary category, Kaylee Bell with 'Getting Closer' for the Country category and Phil Edwards Band with '6AM' for the Folk/Singer-Songwriter category. The winning songs will be announced in September judged by the likes of esteemed songwriters Aimee Mann and KT Tunstall, and a "Fandemonium" prize will also be awarded to the song with the most public votes. Voting closes 14 August at https://unsignedonly.com.

The countdown is almost finally over for The Beths' long-awaited album Future Me Hates Me. Their debut long-player will be released on 10 August via US label Carpark Records and the buzz surrounding the band is stronger than ever.

The Auckland outfit released another single, 'Great No One', from the upcoming album - accompanied by a charming lyric video - much to the delight of New York's Brooklyn Vegan. The Four Oh Five named it their Track of the Day and it's also on the BBC 6 Music Playlist at time of writing.

Themusic.com.au and Stereoboard also ran features about The Beths in July with MTV Australia praising the album's first single of the same name 'Future Me Hates Me', naming it their Upload of The Week.

Having already dominated in Asia over the last two years, Theia's set her sights on the US and UK and her new single 'Bad Idea' seems to be helping her make her way. The video for the track premiered on the London-based Clash Magazine, who featured it as their Track of the Day on 25 July. ASBO Magazine and Demur, both of which are also London-based, each interviewed her in the wake of the single release. Idobi Radio in the US also featured the track as part of their Inbox Jukebox series.

Chelsea Jade released her debut album Personal Best on 20 July only days after she was announced in the Top 20 for this year's APRA Silver Scroll Award for her song 'Laugh It Off', one of the album's hit singles so far. The United States, where she's now based, have also taken a shine to her as evidenced by features in Pulse Spikes and the famous PAPER Magazine. Chelsea Jade performed shows in both Los Angeles and New York in July to what looked like very happy crowds. We're sure both local and international fans alike look forward to seeing what her next single will be and the undoubtedly weird and wonderful visual that will accompany it.