In this issue: Jawsh 685, The Beths, TEEKS, CHAII, BENEE, The Naked & Famous, Jonathan Bree and more! 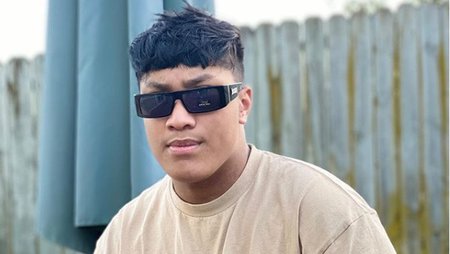 Jawsh 685 Takes Over the World!

‘Savage Love - Laxed (Siren Beat)’ by Jawsh 685 (with US artist Jason Derulo) is a certified worldwide smash. Now entering its fourth week in the Top 10 on the Billboard Hot 100, the track shows no signs of slowing down as it recorded the biggest Airplay Gain in the USA for the past two weeks running.

The song has gone to #1 on the charts in the UK - where it stayed in the top spot for three weeks and it's been in the Top 20 for ten weeks. So far, it has also hit number one in Australia, Belgium, Canada, China, Germany, Ireland, the Netherlands, Norway, Sweden and, of course, New Zealand. It's still climbing the charts around the world with Top 10's to date in France, Denmark, Italy, Japan, Portugal - in fact, it would be much easier to list the countries where the track hasn't charted!

At the beginning of August ‘Savage Love - Laxed (Siren Beat)’ also had the amazing achievement of being officially the #1 Most Streamed Song on Spotify WORLDWIDE. It's still in the global Top 5 on Spotify and is currently chalking up an average of 4 million streams per day. And people are still discovering the song - at the time of writing, has been the most Shazamed song in the world for over a month. Go Jawsh 685!

BENEE’s single ‘Supalonely’ is STILL all the rage since its initial release in November last year on her Stella & Steve EP, and it was sitting on The Hot 100 Billboard chart for 19 weeks. On top of that, she also made her US television debut with a performance for The Late Show with Jimmy Fallon, followed by a performance for The Ellen Show. Fallon is a self confessed fan, and even posted an ukulele cover he did of ‘Supalonely’ on his Instagram.

For more BENEE goodness, check out this acoustic set she did for The FADER of her new single ‘Night Garden’ with US producer Kenny Beats, her interviews on Entertainment Tonight,  The Grammy Museum or with fellow Kiwi Zane Lowe on Beats 1. BENEE also did a little behind the scenes into her production for Beats By Dre.

The Beths’ highly-anticipated second album Jump Rope Gazers finally dropped on 10 July via Carpark Records and Dew Process, and landed them at number 1 on the US College Radio Charts, where they are still in the Top 5 today. Jump Rope Gazers also saw The Beths on the Billboard Album, Emerging Artist and Tastemakers charts; Nielsen had them as #1 on the Alternative New Artist Album charts and Top 40 on the Vinyl sales charts in the USA;  and in the UK they were Top 10 on the Vinyl Album, Independent Album and Breakers Album charts. Just as their debut Future Me Hates Me did, the new album is winning hearts all over the web. It’s received more great reviews than we could possibly include, but you can check out a few from Rolling Stone, PopMatters, DIY Magazine, Exclaim, Mojo Magazine and The Line of Best Fit among many other sites and publications. Jump Rope Gazers was named BBC Radio 6 Music’s Album of the Day on 22 July while Paste Magazine named it one of their Best Albums of July. For some insight into the album, The Guardian and Bandcamp both interviewed the band and DIY Magazine also published a Track By Track rundown of the album. If you are hanging out for The Beths next show, check out this Live on KEXP at Home session they did last month.

The wait is almost over - Teeks' debut album Something To Feel has been confirmed for release in February 2021.  It's been a long time coming, with his 2017 EP Grapefruit Skies now nearly impossible to get your hands on.  Known to his mum as Te Karehana Gardiner-Toi, Teeks will be presenting his album in instalments, with the first piece, ‘I’, featuring four tracks that you can hear here.

The lead single off this forthcoming record is 'Without You', which garnered a Vogue Magazine premier for the video and a feature, naming Teeks 'New Zealand's Soulful Singer To Know'. Indeed.

CHAII’s long-awaited debut EP is here! Lightswitch EP dropped 10 July via Black Lotus Records. You may have seen it posted on Spotify’s Newsroom and now several songs from the EP are getting some pretty massive exposure. The eponymous track ‘Lightswitch’ was selected for Amazon Music’s Breakthrough playlist, ‘Trouble’ was selected by Cindy Lauper herself for her GIRLS Spotify playlist, and last but certainly not least, ‘South’ has been selected for the game, Tony Hawk’s Pro Skater 1 + 2. Check out her performance of the track to celebrate the new game and its soundtrack here. For some background on her creative process, have a read of this interview CHAII did with Acclaim.

The Naked and Famous - Recover

It’s been a big couple of months for The Naked and Famous. First-off they celebrated the 10-year anniversary of the release of their debut album, including the smash hit ‘Punching In A Dream’, by talking to Triple J for their INSPIRED series and performing from home for Billboard. They then released their new album Recovervia their own label Somewhat Damaged. For that they were interviewed by Euphoria Zine, the album received an 8.5 out of 10 review from The Line Of Best Fit, an 8 out of 10 review from PopMatters and they were even featured on Grammy.com.

Jonathan Bree - After The Curtains Close

On 17 July, Jonathan Bree released his fourth album After the Curtains Close via Lil’ Chief Records and it’s been getting favourable reviews all over the place - including a whole bunch that would require the services of Google Translate. Bandcamp featured After the Curtains Close on their site, Indie Rocks in Mexico gave the album a 9 out of 10 review, Benzine Mag in France gave it 5 stars and Radio X in Switzerland, PanM360 in Canada and Long Brit in Spain are fans too.

Listen to a playlist of the songs and artists featured in this month's newsletter on Spotify or Apple Music!
Back to International News