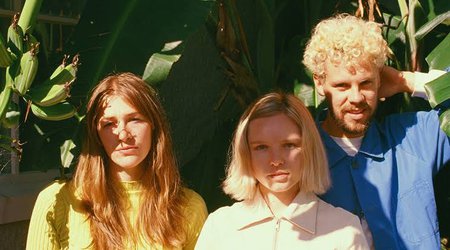 Mermaidens - 'She's Running'
Wellington trio Mermaidens are building up massive anticipation for their third album Look Me In The Eye, out 6 September on Flying Nun Records. The buzz around the release of their video for single ‘Millennia’ from blogs such as the UK’s Circuit Sweet and Australia’s Fashion Journal had hardly died down when they hit us with their latest single ‘She’s Running’. The track premiered on themusic.com.au.

Look Me In The Eye is now available for pre-order through Bandcamp and if you pre-order the limited edition gatefold pressing of the album, you’ll go into the draw to win the exclusive Moon Cycle chorus pedal which She Shreds Mag are pretty excited about.

Mermaidens are playing at BIGSOUND this week before performing another show at Globe Alley in Melbourne on 7 September. They’ll then set off for a 16-date tour of Europe and the UK.

Miss June - 'Anomaly'
Miss June couldn't resist giving us just one more single before the release of their album Bad Luck Party via French Kiss Records on 6 September. The track 'Anomaly' dropped on 26 August much to the delight of Classic Rock Magazine who named it one of their Tracks of The Week and the Indie Show with Jack Saunders on BBC Radio 1. They also received mentions on Consequence of Sound, Brooklyn Vegan, Northern Transmissions, Pilerats, Elicit Magazine, Scottish Music Network and The Girls At The Rock Show.

Following the release of the album, Miss June are heading off on a world tour starting in Sydney on 11 September, before performing in Europe, the UK, and then North America.

Purple Pilgrims - Perfumed Earth
Purple Pilgrims released their second album Perfumed Earth via Flying Nun Records on 9 August and it was named Bandcamp’s Album of the Day, made the NPR Best New Albums for August playlist, and was reviewed by Pitchfork, receiving a 7 out of 10 rating!

Church & AP - 'Roulette'
Church & AP have released yet another banger that is getting plenty of love from audiences offshore.

The track ‘Roulette’ was featured in NY’s Elicit Magazine and Digital High in Washington DC, and Complete Music Update and Son of Marketing in Italy.  BBC Radio 1Xtra continue to prove they’re big Church & AP fans, with DJ Target showing the track love. For insight into the rap duo, they were recently interviewed for Line of Best Fit.

BENEE on Billboard
Yet another song from BENEE’s recently released EP, FIRE ON MARZZ, is getting global traction - with Billboard featuring the track ‘Afterlife’ on their Labour Day Weekend Playlist!

If you missed Benee’s first run of international shows earlier this year, don’t worry, she’ll be touring the UK, Canada, the US and Australia all before the end of 2019 - including a set at Spotify’s Front Left Festival in Melbourne next month with the likes of Sweden’s Tove Lo and Norway’s girl in red.

Aldous Harding & Marlon Williams at Supersense
Aldous Harding and Marlon Williams’ recent Supersense shows at Arts Centre Melbourne massively struck a chord with audiences. The Sydney Morning Herald gave the separate shows a shared review of 4.5 out of 5 stars while The Guardian gave the festival a 4 out of 5 star review, naming both Aldous and Marlon as highlights  - with a hat tip to Purple Pilgrims too.

Beat also reviewed Aldous’ set, while Happy Mag wrote about her show in Sydney. If these reviews are anything to go by, her powerful shows are truly connecting with audiences across the Tasman.   For those who are yet to experience it for themselves, Aldous kicks off a North American tour later this month with fellow kiwi, Tiny Ruins, before heading to Europe and the UK for a run of shows from November through to December.

For those in Australia hoping to see Marlon Williams perform soon, he’ll be touring as part of Paul Kelly’s Making Gravy Tour across the country this December.

Māmā Mihirangi & The Māreikura wows Canadian crowd
Māmā Mihirangi & The Māreikura’s powerful performance continues to wow in Canada with her set at Montreal’s First People’s Fest making a huge impression on not only the massive crowd but also the local media. Off the back of performances such as this and her recent appearance at Philadelphia Folk Festival, she’s been announced as part of the Port Fairy Folk Festival’s 2020 First Nations Program in Australia.

Jon Lemmon - 'It's Gonna Be Alright' Remix
Jon Lemmon’s ‘It’s Gonna Be Alright’ has already surpassed 4 million streams on Spotify - and now the track has been remixed by Belgium’s Netsky & NZ’s t1r.  This version of the upbeat track, which is just made for summer, was dropped at the Tomorrowland Festival in Belgium (which is attended by 185,000 people!) by Netsky himself, and it was also selected for the soundtrack of the Tomorrowland After Movie 2019.

Listen to our Spotify playlist of the songs and artists featured in this month's newsletter!