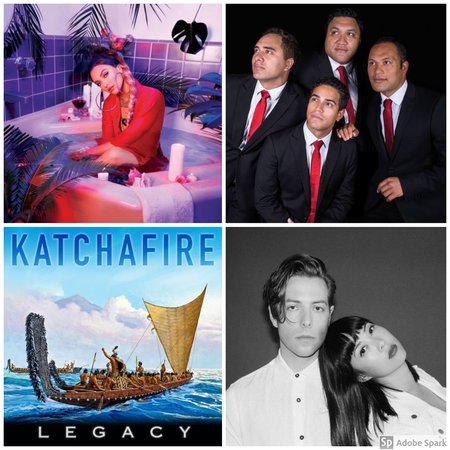 Alien Weaponry
It seems there are no signs of slowing down for Waipu's Alien Weaponry. Their debut album Tū finally dropped on 1 June on Napalm Records and is taking the world by storm. The record garnered over a million streams on Spotify in the first month since its release and tracks from were added to over 7,000 playlists worldwide - including Spotify's own metal genre playlists New Blood, New Metal Tracks, Kickass Metal and Thrash Metal Big 4 & Friends. With attention like this, it's no wonder they reached #13 on the international iTunes Heavy Metal Albums chart.

Tū also continued to receive rave reviews, most notably from Revolver Magazine who listed the album as one of the "25 Best Albums of 2018 So Far", describing it as "brave, innovative metal that bodes of a bright future for heavy music".

This month the trio will take their energetic live show offshore for the first time, starting in Australia - their show at The Last Chance Rock & Roll Bar tomorrow in Melbourne has already sold out. They'll then head to Sydney, Brisbane (where they're headlining Dead of Winter Festival), and then Europe where they're still adding shows all over the place between their many festival bookings. Check out our international gig guide for details.

Katchafire
The world's reggae community have shown Waikato's Katchafire a lot of love in the wake of the release of their new album, Legacy. Out 1 June on Universal, Legacy received rave reviews from around the globe including from AMNPLIFY in Australia, the UK's Worlda Reggae and Germany's Reggaeville. All this buzz culminated in the album debuting at #3 on the U.S. Billboard Reggae Album chart in its first week and it's still sitting in the top 10 as of 3 July!

Currently in the midst of a massive US tour, Katchafire will be performing all over Australia (as well as Aotearoa New Zealand) later this year.

Janine
Shortly after her nine-date headline tour of the US, R&B star Janine released her debut album 99 via Atlantic Records on 25 May.

The US's Digital Journal called the album "glorious" giving it an A rating, and the popular pop-culture magazine Paper Magazine, with over 1 million Instagram followers, also highly-rated the album saying it was "one that will surely wear your repeat button out".

Janine's great month ended with a pretty unusual opportunity for the singer - she sang the American national anthem to open the Los Angeles Dodgers and the San Francisco Giants baseball game at Dodger Stadium in LA, which has a capacity of 56,000 and a potential television audience in the millions!

The Naked And Famous
Eight years after their breakout hit 'Young Blood' blew up around the world, The Naked And Famous still prove to be a hot ticket in the USA where they're now based. The band released an exclusive live album film featuring their A Still Heart show at the Moroccan Lounge in Los Angeles on Apple Music on 8 June before taking the show on the road with a stripped down set for seven dates across the US that all but sold out.

Billboard seem especially excited about the New Zealand act, tapping them for their regular Takeover Tuesday feature and inviting them to perform for Billboard Live on 27 June. The UK's Verge Magazine also interviewed them ahead of their upcoming shows. The A Still Heart Stripped Tour continues in the UK and Europe this month.

Modern Māori Quartet
Reviews have been rolling in as the Modern Māori Quartet made their way across the diverse territories of Australia and Germany over the last month. Their June performance at the Adelaide Cabaret Festival seemed to really make an impression - with Arts Review calling their vocal performance "as smooth as a silk and harmonically precise", The Advertiser saying the show was full of "unbridled joy and genuinely good-natured, ingeniously crafted humour". InDaily also called it "a performance that no-one really wanted to end" and The Clothesline's Nikki Fort said her "soul is enriched from their presence". Germany's RGA were also blown away by the group's singing.

Modern Māori Quartet return to Australia later this month before heading to the UK to perform at Bush Hall in London.

The Beths
Whilst on their first tour of the northern hemisphere - spanning the US, UK and Europe - The Beths released the second single from their upcoming album Future Me Hates Me and the track has made waves to say the least.

The single 'Happy Unhappy' was featured by both Stereogum and Substream Magazine, added to Triple J's Best New Music list and was even named by The Rolling Stone US as a "Song of the Summer". Jon Dolan, who selected the track for the feature, said of the song "the pure joy you can sense in them having constructed this thing, and now to be actually playing it, is incredibly exciting".

Future Me Hates Me will be out 10 August via US label Carpark Records and is now available for preorder.

BAYNK
After the release of his double A-side single titled 'Be in Love/Years' in May, electronic producer, BAYNK (originally from Hawke's Bay, now LA-based) has been getting buzz all over the place. 'Be In Love' got regular play on Australia's Triple J and the songs received a rave review from New York's Early Bird Music, alongside an interview with BAYNK himself.

Highsnobiety (who have over 2 million followers on both Facebook and Instagram!) then premiered the video for 'Be in Love' on 21 June, mere days before BAYNK embarked on his first headline tour of the United States which included a sold out show at Rough Trade in New York on 23 June.