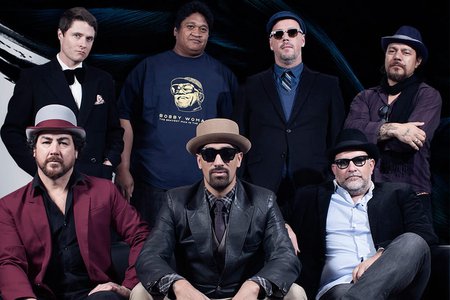 The Beths
The Beths finally released their much awaited debut album Future Me Hates Me via Carpark Records and it was definitely worth the wait. Pitchfork gave the album an amazing 7.9 out of 10 review calling it "one of the most impressive indie-rock debuts of the year". The Rolling Stone ran an interview with Liz and later, a 4 out of 5 star review of the album, calling it "a true power-pop monument". BBC Radio 6 also gave it the title of Album of the Day on August 13.

Other great reviews came from The AV Club, The405, Happy, UPROXX and Brooklyn Vegan and another interview with Liz ran on Flaunt Magazine.

The Beths are about to head out on a brief Australia tour including BIGSOUND in Brisbane then will be heading to the US in late-September before returning to Europe and the UK late October.

Fat Freddy's Drop
Fat Freddy's Drop have been making their mark all over the planet for years now and still show no signs of slowing down. The ensemble have just returned from their tour of Europe made up of festival appearances, including their closing set on the main stage at the massive Rototom Sunsplash in Valencia, Spain, as well as headline shows including a sold-out show at Berlin's 10,000-capacity Zitadelle Spandau.

Belgium's Humo gave their Antwerp show a 4 out of 5 stars and Switzerland's Aargauer Zeitung raved about their Basel show at Arlesheim Cathedral Square.

Fat Freddy's Drop will return to Europe in October for what's ended up being a 12-date headline tour so far, with dates selling out and extra shows being added due to popular demand! Supporting the tour will be the amazing, Ladi6.

Roy Montgomery
Christchurch guitarist, Roy Montgomery released his 8th album Suffuse on Ba Da Bing Records/Grapefruit Records much to the delight of fans of his atmospheric and soundscape-y style.

Suffuse received an impressive 7.6 out of 10 from Pitchfork while NPR premiered the album alongside a hefty, positive review. The album was also raved about by the likes of Brooklyn Vegan, Italy's Il Cibicida and Stereogum listed it as one of their "albums of note" in the second week of August.

Broods
August got off to a great start for Nelson pop sensations, Broods, with the announcement of their signing to New York-based label, Neon Gold Records. They then released their first single in two years, 'Peach', earning great reviews from the likes of Earmilk, Atwood Magazine, France's Aficia and it was also Triple J's third most-played song in the third week of August. The Fader also featured them in a 'Would You Rather' segment while Billboard interviewed them in their New York offices.

'Peach' is the first single off their upcoming album expected for release in early 2019.

Neil & Liam Finn
The father-son collaboration from Neil and Liam Finn that many had been waiting for arrived on August 24 in the form of Lightsleeper, via Lester Records. The album attracted plenty of attention worldwide with The Guardian and The Irish Times publishing reviews, Billboard, Noisey UK and Australia's ABC News interviewing them for features and Stereogum featuring their video for 'Anger Plays A Part'.

Connan Mockasin
Connan Mockasin released a new single, video and announced a new album so of course everyone was talking about him in August including Spin Magazine, Pitchfork, Consequence of Sound, The Vinyl Factory and Far Out Magazine. Uncut also featured the single 'Conn Conn Was Impatient' on their best new music playlist.

The album, Jassbusters, to be released on October 12 via Mexican Summer, will be his first solo record in 5 years and accompanied by a film by Connan himself entitled Bostyn ‘n Dobsyn.

Immediately following the album's release, Connan will be touring North America, Europe and UK over October and November.