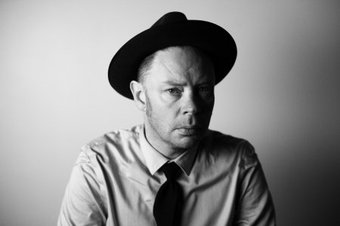 Allow the darkness in.... The wolf at the door..... I welcome the dead into my soul, You have dragged me to hell

Part man part wheel, Delaney Davidson is part wandering minstrel, part travelling salesman. One hand holds a small brown suitcase; his trade, his ghost orchestra, the other holds his guitar. One foot firmly in the Blues Trash corner of the ring, the other on the road, you could say Delaney sees music as he sees geography, and that although he has certain preferences, in fact all territories are up for grabs. Ireland, Germany, Italy, Brazil, UK, Switzerland, Mexico, Austria, Romania, Belgium, Holland, Russia, France, USA, Argentina, Australia and New Zealand, all destinations on the ten year Solo Tour with which Davidson has turned homelessness into a success of its own. Man of a thousand faces, his work with paint, music, film and concept all has traces of his unique take on life. Part new world and part old world, this duality is echoed in the flavours he evokes with his work; Past VS present, too loud for folk VS too quiet for rock, Light VS Dark, Davidson's restless work refuses to be still for the portrait it is asked to sit for. A pattern we see in his own restless life, indeed, the apple never falls far from the tree.

I think we all need a few rotten apples, and sometimes that's where the flavour comes from

"One rotten apple ruins the whole barrel" laughs Delaney when asked to describe his work. "But then I think we all need a few rotten apples, and sometimes that's where the flavour comes from, ripe vs rotten, where does one cross over into the other"

This approach of DIY has a special flavour of its own, and can continually be seen in Davidson's work. "Necessity is the mother of invention, and a low budget will lead to all sorts of beautiful stand-in potential. Whistling instead of violins. I love to see things take a step, and I think people like to see the triumph of a good idea over a slick production, I think it gives them hope and inspiration. Ultimately the result of hi gloss is alienation and a removed and depressed let down feeling of not being good enough. I say let it all go!"

While Davidson seeks to embody this ethic he also displays a degree of skill in his work. In a former life his painting exhibitions of Nocturnal Landscapes, in the early 1990′s, showed a minimal use of form bordering on abstract and a tonal blend of colours that were darker than black. What these works lacked in skill they made up for in concept; they delighted the man on the street and astounded the connoisseur.

While he has spread the word of both New Zealand as well as Voodoo Rhythm all through the world, there has also been talk of his being awarded an Honorary Masters degree in recognition of the body of work that has appeared over the years from his hand.

He proves this true in the series of short video films he is continually releasing on You-tube. All made on little or no budget, each one a triumph of style and medium. Lending itself well to visuals, the personality of his musical work has been sought after for film soundtrack, see the "Flammend Herz" (story of Herbert Hoffman, Hamburg Reeperbahn's oldest tattoo-ist), as well as "Netherwood " a localized tale of rural darkness, and the Delaney scowl is immortalized by Slowboat Films as his portrayal of Parrish echoes across the screen in the soporific noir-cotic nightmare "The Road to Nod" the tale of an old Jailbird as he spirals to hell.

His doorkeeper stance on stage work has often been one of pioneer, as was shown in his introduction of the lap steel into the Basel Stadt-theatre's production of ‘Die Drei-groschen Oper' (Threepenny Opera). Again walking the lines between, Delaney's master of ceremonies attack was a key ingredient in the success of "Random Acts of God" a Contemporary Dance show as response to Christchurch's Earthquakes by Corrupt Productions.

Wisconsin's Steelbridge Song-festival (Brain child of Timbuk3′s Pat Macdonald), as well as Port Lyttleton's Harbour Union both showcased his dark sense of humour and his ability to write with others, as does his melodic work in the Dead Brothers, but he seems to come into his own when he is solo.

"I think its hard enough to follow your own path or brain and find the time or space to hear it. The idea of asking anyone else to follow it seems like a huge task for all involved. If you only have one suitcase, you can move house in a half hour. On the other hand if you have your house tidied up you can invite people round to dinner, and I love to work with others on certain things to achieve a flavour I can't capture alone"

Has it become a way of life for him? "I never worked so hard as I do now, Self Employment is the key to an early grave, I see this in lots of musician friends of mine as well. You are your own travel agent, your own booking agent, your own photographer, your own graphic designer, your own manager, your own producer... on top of that you are a musician. With my show I am the drummer, singer, guitarist and sometimes harmonica player, you could say it is not a way of life, it IS life" 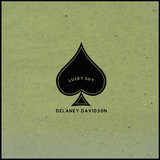