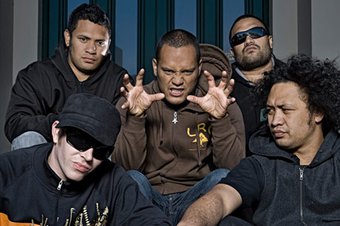 Regarded historically as one of New Zealand's most electric and sonically powerful live bands, Kora returned with a vengeance upon the release of their second album Light Years in October 2012.

In the studio Kora have always created a monster. Their music an evolving hybrid of genre-evading sounds with an ethos to push sonic boundaries in wildly different directions on each release they have made. Kora have created their own sound. One not able to be emulated, nor put into a box of any size.

With the 2012 release of ‘Light Years', space has been their final frontier as Kora mapped a new constellation that warps between future-shocked funk, soul and r'n'b and has been self-dubbed ‘alien funk'. The name points to the galactic transformation in sound the band has undergone since the release of their multi-platinum debut record.

The self-titled debut album was light years from ‘Light Years'. Its 2007 release solidified Kora as one of New Zealand's most popular acts as it careened to the top of the NZ album chart with a bullet. Their unique style masterfully connected the dots between funk, rock, reggae, metal, hip hop and electronic rhythms, while their live shows were lauded as festival favourite performances and their tours sold out across the country.

Now with a platinum selling EP (Volume, 2004), a double platinum debut album and ‘Light Years' quickly climbing from Gold status towards Platinum, Kora take their sound from New Zealand to the world. Already having forged an enduring reputation in Australia with over 15,000 records sold and 6 compelling and critically received tours they return to Europe for the second time in 2008 to build upon their initial foray in 2013. These five fearless explorers of sound have sights fixed upon the stars, seeking out new aural avenues and frequencies to boldly go where no band has gone before.

It's been four years since Kora launched its self-titled, worlds-colliding debut album, that connected the dots between funk, rock, reggae, metal, hip hop and electronic rhythms. Now this five-strong collective ...