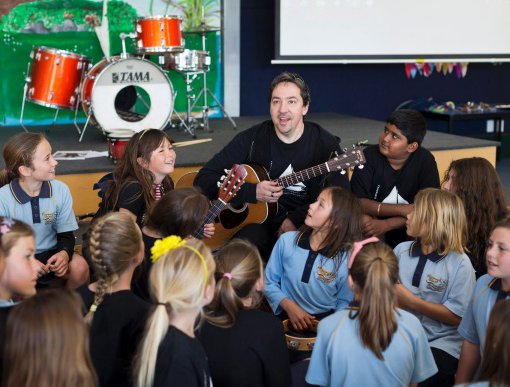 Since 1988 Jon has performed at more than 1500 live shows and sold over 250,000 albums world-wide, with two albums certified double platinum and five albums certified gold in New Zealand and Australia. Shihad was admitted to the New Zealand Music Hall of Fame in 2010, and the following year won Best Rock Album at the 2011 Vodafone Music Awards for Ignite; and Best Rock Album in 2015 for Five Eyes.

Having enjoyed a stellar career as a singer, songwriter and theatre performer with no signs of stopping, Jon's passion for nurturing the musical talent of the next generation is unmistakable! He says, "Mentoring is just as challenging and inspiring as anything I've done in my professional life. I get to meet so many talented people and share what I can about the art form that I love, and if I can, help."

Based in Melbourne, Jon includes mentoring in schools whenever his projects bring him home to New Zealand, and has brought his talents to students in Auckland, Wellington, Christchurch, Otago, Nelson and Dunedin.

Jon has been mentoring with our programmes since 2012.

Teacher Bronwyn Barnes of Dunstan High School says,
"We would love to have Jon back any time he is in the neighbourhood. He has a lovely way of working with the students, quickly building a rapport and earning their trust. They produced some very good work under his guidance. In short, it was a great experience."