Tonight, the 2022 Taite Music Prize, which highlights outstanding New Zealand albums released in the previous calendar year, was awarded to Anthonie Tonnon for his critically praised album, Leave Love Out Of This released on Slow Time Records. Anthonie receives a $12500 cash prize thanks to founding partners Recorded Music NZ and the NZ Music Commission. 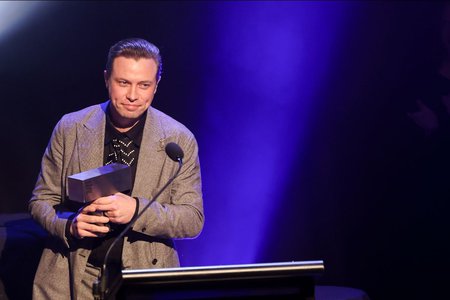 The Auckland Live Best Independent Debut went to Jazmine Mary for her debut album The Licking of a Tangerine. The album was recorded at Neil Finn’s Roundhead Studios with support from Peter Ruddell (Wax Chattels, Sulfate) andDave Kahn (Marlon Williams, Reb Fountain). Her sound has been described as “dream-folk”; visceral and haunting with “rose-tinted sounds which will allow you to be transported somewhere bold and watery.” Jazmine is awarded a $2000 cash prize plus a performance or technical upskilling opportunity thanks to Auckland Live.

The Independent Spirit Award was granted to Karyn Hay ONZM for her contribution to music awareness in Aotearoa since the 1980’s through the groundbreaking TV series, Radio With Pictures and throughout her career via Kiwi FM, and music documentaries. Karyn’s contribution continues as host of RNZ National’s Lately show with an eye on live events, an ear for music, a great sense of humour and a genuine interest in people and their stories.

Dylan Pellett, General Manager Independent Music New Zealand says, "This has been a special celebration this evening in so many ways, and I wish all of the winners my hearty congratulations. What a privilege to present this event on behalf of our membership and the wider music community. Top work everyone!"

The event was attended by 300+ industry, media, and artists from across the country and was a joyous celebration of outstanding creative works made in Aotearoa.

The Taite Music Prize panel tasked with determining the finalists was made up of an extensive selection of music media/industry specialists. The finalist judges made their decision based entirely on the artistic merit of the album. Sales, genres, artist recognition or popularity are not contributing factors in their decision-making process.

The ten albums in contention for the 2022 Taite Music Prize were:
Listen on Spotify HERE


The Auckland Live Best Independent Debut Award celebrates the freshest talent of Aotearoa and the three finalists were:
Listen on Spotify HERE

The NZ On Air Outstanding Music Journalism Award is the first of its kind for Aotearoa New Zealand and the finalists were:


The 2022 recipient of the Classic Record has already been announced to recognise the 1994 New Zealand album; PROUD - An Urban-Pacific Streetsoul Compilation.  Listen on Apple Music HERE or on Spotify HERE

Also announced at the ceremony is the recipient of the 2022 Independent Spirit Award. This recognises and celebrates a New Zealander who is passionate about NZ music and has dedicated themselves to helping artists and the wider music community to grow and find their own unique pathways.