Gig Starters – a Seminar & Workshop About Putting on All Ages Gigs

Gig Starters Aotearoa are hosting a free event on Sunday 20 November at Big Fan with a seminar, a production workshop and an all ages gig! 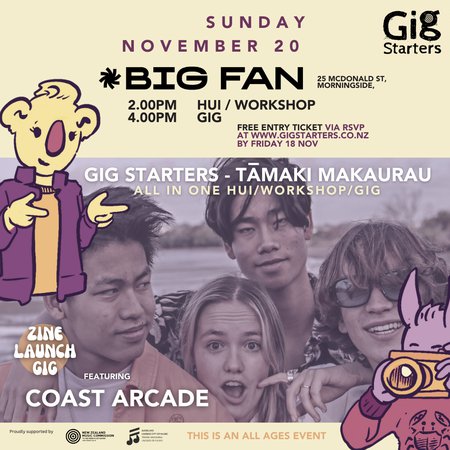 All are welcome to attend, and it's free entry - just make sure to RSVP by Friday Nov 18 at gigstarters.co.nz

Gig Starters Aotearoa are hosting a free event on Sunday 20 November at Big Fan with a seminar, a production workshop and an all ages gig!

Kicking off at 2:00pm, we’ll be discussing the need-to-knows of putting on your own all ages gig with a crew of industry professionals, a local recording artist and a production technician.

After the hui will be a workshop at a real-life soundcheck, with the chance to watch and be part of a live production set-up.

And then in celebration of releasing the first Gig Starters Zine at 4pm, it's gig time! We’re lucky to have rising local stars COAST ARCADE performing.

There will be an awesome team heading along to share their wisdom about putting on great all ages shows. The Panel or ‘Crew’ as we like to call them for this event are:

Ciara Bernstein - Founder of all ages venue/recording and rehearsal space 'The Vault’, Ciara is a multi-instrumentalist playing in a number of Tāmaki Makaurau bands as well as a key member of the Girls Rock! / To The Front programme.

Gussie Larkin - Gussie has her fingers in many pies within the music industry - which vary from working in the promoter department for Live Nation Aotearoa, to programming the Garden Stage at Rhythm n Vines and promoting tours with Drunken Piano Touring. She is also a successful recording artist from the bands Mermaidens and Earth Tongue.

All are welcome to attend, and it's free entry - just make sure to RSVP by Friday Nov 18 atgigstarters.co.nz

This NZ Music Commission event has been made possible with help from UNESCO Auckland City Of Music.

What is Gig Starters?

Gig Starters is an initiative run by the NZ Music Commission to inspire young people to put on gigs of their own all around Aotearoa.

‘Creating live gigs is an awesome way to make first steps into the industry as a musician or someone who is interested in a career behind the scenes in music. You’ll get to be part of putting on an event showcasing great local music, and learn new skills at the same time.’ - Rodney Fisher, NZ Music Commission.

It started as an event … Gig Starters began last year when the Music Commission ran a series of seminars in Auckland, Palmerston North, Wellington, Christchurch and Dunedin. The seminars in every town were followed by an all ages gig.

Then it became a zine … For the next part of the Gig Starters initiative we have created a zine style booklet called A Guide To All Ages Music Events In Aotearoa.

The zine was illustrated by Moskon Review, an artist from Hamilton who has created many gig posters over the years and is part of the team at the local music venue Last Place.

To read the digital zine head over to gigstarters.co.nz