Aotearoa songwriters and composers were celebrated tonight at Spark Arena in Tāmaki Makaurau for the 2022 APRA Silver Scroll Awards | Kaitito Kaiaka. Over 500 guests joined the first in person celebration since 2019, with many tuning into the live stream online. 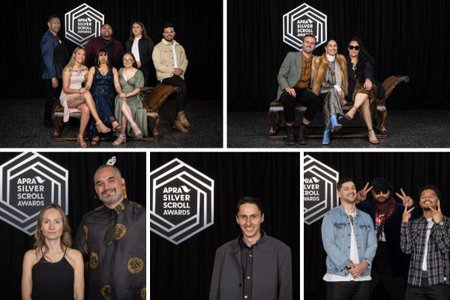 Music directors Rob Ruha and Cilla Ruha brought together incredible musicians from around the motu to honour the Silver Scroll Award finalists, APRA Maioha and SOUNZ Contemporary Award winners, and the 2022 NZ Music Hall of Fame inductees, Ngoi Pēwhairangi and Tuini Ngāwai alongside presentations of the Screen Awards.

The coming together of Rob Ruha and Ka Hao is seamless, as a project to promote and revitalise te reo Māori, the group's name refers to the proverb ka pū te ruha, ka hao te rangatahi (as the old fishing net is worn, a new one is made), referring to youth growing up and entering adulthood. With his distinguished and respected kaitiaki of waiata reo and rangatahi in Aotearoa, Rob Ruha is the perfect conduit to welcome Ka Hao into the legacy of the Silver Scroll.

The APRA Silver Scroll was presented tonight by APRA Board Writer Representative and Aotearoa songwriter icon, Bic Runga and performed by Stan Walker and Hamo Dell. Ka Hao and Rob Ruha follow luminaries such as Troy Kingi, BENEE, and Aldous Harding, in taking home the big award this year. As voted by their songwriter peers, tonight’s win is a special moment for waiata reo Māori and recognises the indellible work to revitalise the reo through exemplary songwriting and composition.

‘Te Iho’ praises the essence of powerful wāhine Māori, using poetic language to express the importance of women. Performed by Aja and Byllie-Jean, ‘Te Iho’ is a potent waiata about whakapapa and the DNA passed down from atua wāhine.

The award was presented by Hana Mereraiha, followed by a special performance by Sianne. This is the second year APRA members were invited to vote in the Maioha category, deciding the Top 3 shortlist and overall winner.

Reuben Jelleyman was presented the 2022 SOUNZ Contemporary Award | Te Tohu Auaha by Minister of Arts, Culture, and Heritage, Hon. Carmel Sepuloni. Reuben was selected for his orchestral work ‘Catalogue’ a “chaotic collision” of Reuben’s musical exploration during his studies at CNSMDP in Paris, and written for the ensemble Multilatérale.

Reuben proudly took home the SOUNZ Contemporary Award after two previous nominations and the presentation was followed by a spell-binding performance by IA.

The APRA Best Original Music in a Feature Film Award | Tohu Pūmanawa was awarded to Dana Lund and Horomona Horo (Ngā Puhi, Ngāti Porou, Taranaki) for their score on Whina, a retelling of the legacy of Dame Whina Cooper. Lund’s string-heavy score envelopes the viewer during moments of deep emotion, while seeding a sense of unnerve for what is to come. Recognised internationally for his invaluable knowledge of ancient Māori instruments, Horomona perfectly weaves taonga puoro into the compelling score of Whina.

Diggy Dupé, Jonathan Crayford, Joel Tashkoff (Choicevaughan), and Troy Kingi were presented the APRA Best Original Music in a Series | Tohu Paerangi for The Panthers soundtrack. Their gripping and emotional compositions perfectly paired with the recounting of the Polynesian Panthers and their work amidst the contraversial Dawn Raids. The soundtrack which was released as a standalone album features lauded hip-hop/RnB artists Che Fu, MELODOWNZ, SWIDT, Rizvan, Bella Kalolo and many more.

Both screen awards were presented by Chelsea Winstanley and Tweedie Waititi.

The 2022 APRA Silver Scroll Awards are proudly supported by NZ On Air and Te Māngai Pāho with thanks to Hallertau and Sublime Wines.