Flying Nun Records and Pōneke’s Womb are thrilled to announce the trio’s upcoming album, Dreaming of the Future Again — out digitally and on 180g black vinyl on November 11th, 2022. 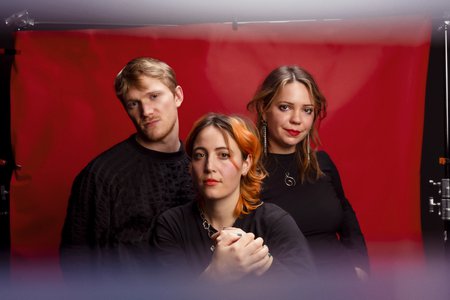 Womb is made up of siblings Cello Forrester (vocals, guitar, strings), Haz Forrester (synth, guitar), and Georgette Brown (drums). Their music is a composite of the three and builds on the shoegaze and dream pop sounds they are inspired by. Dreaming of the Future Again is Womb’s sophomore album, recorded between 2020 and 2022, between living rooms and bedrooms, and at their dear friend and collaborator Bevan Smith’sbackyard studio, Circle Blue Studios. “Dreaming of the future again” is a phrase that sprang to mind for Cello as they woke up one morning, and these are the words that tether each song on the album together.

The album builds musically from where their previous album, Like Splitting the Head from the Body, left off. The arrangements have moments that are layered, warm, and ethereal, where Georgette's driving drums are met with percussive samples, Haz’s synths bend and rise, and Cello’s textured strings stretch across the tracks. There are also sparse moments that draw you to Cello’s direct vocal delivery, for example on the opening track, Sylvan’s Song, and later in The Dove.

Lyrically, the songs trace moments across the two years recording the album, drawing on a repeated lexicon for Cello: of light and refraction; butterflies; birds; and dreaming. Each song is both personal and allegorical, and looks at connection and the things we are tethered to.

The album art is a drawing of a star-flower by band member and artist Georgette — titled, “I want you to see above your head a beautiful, beautiful star”. The drawing is on the wall of Cello and Georgette’s kitchen. The title of this artwork comes from a book that Georgette’s dad, Justin, used to read to her, guiding a visualisation of a star that is your very own, one which you can carry with you everywhere you go.

The trio have also released the first single from the album, ‘Oceans’, accompanied by a video (above) directed by none other than Martin Sagadin. The first spark of an idea for making this video came from wanting to build a rain machine. The band wanted to pay homage to the ever-iconic kissing-in-the-rain scene à la ‘All The Things She Said’ by t.A.T.u., and bring the line in their song, "I just want to bring you oceans", to life.